"CCTV" stands for Closed Circuit Television. Closed circuit Television uses one or more video cameras to transmit video images and sometimes audio images to a monitor, set of monitors or video recorder. The difference between CCTV and broadcast TV is that standard TV openly broadcasts signals to the public. CCTV is not openly transmitted to the public, but remains in a closed circuit. CCTV uses either wireless transmission or a wired transmission to send the video footage from the video cameras to the monitor(s) or recording device. Most CCTV systems are used for surveillance which can include security monitoring, spying or for safety monitoring purposes.

CCTV systems in Ireland have become extremely popular over the past decade as the technology has improved and become more affordable. The majority of CCTV cameras in use today are usually for surveillance and security purposes. You can find CCTV systems in almost every bank, casino, pub, shopping centre and large department store. In fact, CCTV systems have become so affordable; almost every shop has CCTV systems for security purposes. Most insurance companies now require commercial premises to fit CCTV surveillance systems.

There are many types of CCTV cameras, they can be categorised by the types of images they are able to capture, the amount of frames they can take per minute, the type of connection to the monitor or video recording device, whether they are able to move position, and special functions they can provide.

Types of Images: CCTV cameras generally take both black and white or colour video images. In addition, many CCTV cameras can even have night vision capabilities which allow a CCTV camera to view and record low light images using special technology. IP cameras are becoming more and more popular as their price decreases, as they can have mega-pixel super-sharp clarity and can be connected to a standard computer CAT5 network, most have POE capabilities.

All Analogue cameras use a BNC connection, which is round, silver, and connects witha single twist.

Composite or CVBS is the older, non-HD secuirty camera traditionally used until the start of 2016

The main advantage of an analogue TVI HD system is that older analogue security systems can be easily upgraded, as TVI HD cameras use the existing coax or CAT5 cables as traditional CCTV systems with BNC connectors, most of the time you can even use the same 12 volt DC power supplies. Swapping out the old cameras and recorders can be done very quickly and huge picture quality increases can be inexpensively achieved. 2MP TVI HD cameras costing less than €70 can be more than six times sharper than a 700TVL analogue camera from a couple of years ago.

All IP Network cameras use RJ45 connectors with CAT5 or CAT 6 cable.

Frames per Second: Frames per second means the amounts of full frames that a video camera captures and sends to a recording device or monitor per second. While most CCTV camera systems are easily able to capture 30 or more frames per second (30 fps is considered real time), the amount of video tape or digital storage would be enormous to record every moment of everyday. For most shops, speeds of 1 to 6 frames per second are more than enough to catch and record a perpetrator committing a crime.

Pan Tilt Zoom (PTZ) Cameras: These types of CCTV cameras allow a person controlling the surveillance of an area to move the camera remotely, usually with an RF or wired controller. Most moveable cameras allow the person monitoring it to move the camera from right to left (pan), up and down (tilt) and from a tight angle to a wide angle (close up zoom).

Until very recently there were only traditional analogue cameras, but that has all changed now with the easy availability of HD IP Network Cameras. So what's the difference? Analogue cameras have a maximum TVL count of 720, (some very new cameras, (960H) increase this to 960TVL). That is 720 X 480 individual pixels, or roughly 0.35MP, (mega-Pixels). a 1.3MP IP camera has 1.3 Million Pixels, so is almost four times sharper than a a 700TVL analogue camera. A 3Mega-Pixel IP camera is nearly nine times higher quality than an analogue image. So there is a substantial jump in quality between analogue and IP cameras. IP has other advantages too: it can be easier to install and the IP digital signals are much cleaner and are generally not prone to interference. Many IP Network cameras and recorders, (called Network Video Recorders, or "NVRs"), have built-in PoE, which means that one single CAT5 cable is all that is needed to connect each camera to the recorder. The camera gets its power from the recorder, which makes installation much easier and faster. The downside of IP cameras is that they are currently more expensive than a standard analogue camera, generally twice as much, depending on the type of camera. 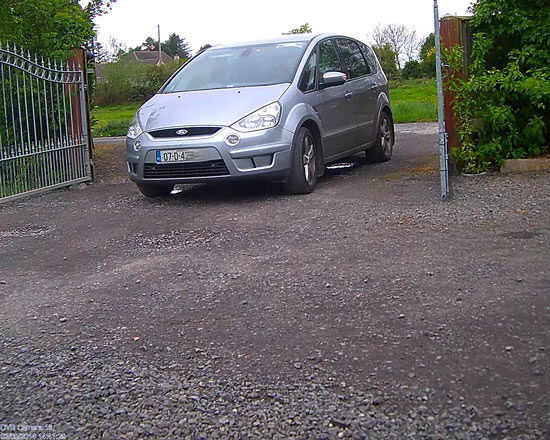 Don't forget to click on the pictures for the full size images. As you can see, the IP cameras are far better than the analogue cameras! The van is 12 metres away from the camera and the registration plate can still be read, but not in the analogue snapshop.

A sample of a HD IP camera in a very dark enviroment: 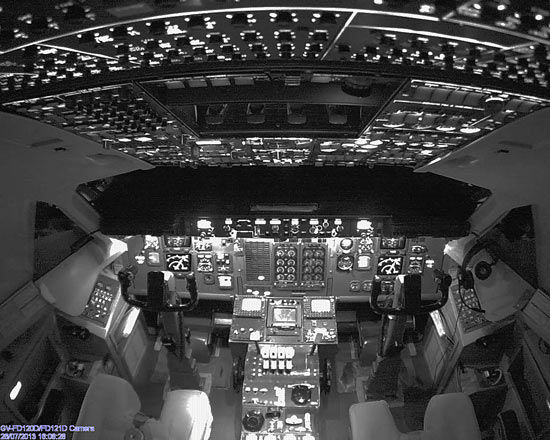 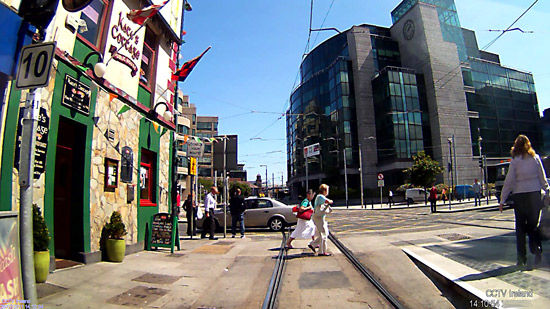 There are two main types of connections for CCTV cameras to the monitor or recording device, they consist of either a fixed cable or a wireless connection.

Fixed cable connection means that your camera will be physically connected to your monitor or recording device via a cable. Usually coaxial cables are used, most of the time they are similar to your normal home TV coax cables. Lengths come in 25, 35, 50, 100 or 500 metres. As the distance increases, you may see degradation in signal quality. For distances longer than 80 metres, you can purchase higher quality coaxial cables such as RG59 coaxial cable for distances up to 300 metres and for distances more than 300 metres, but less than 700 metres, you can purchase CAT5 cable, which also requires an inexpensive balun connection at each end.

Most wireless CCTV cameras now use the 5.8 Gigahertz frequencies to transmit their video images to a monitor or DVR (digital video recorder). Usually, frequencies can be slightly changed to have more than one group of cameras in a specific space. Wireless CCTV cameras used at this frequency can easily transmit through most walls and obstacles; however each individual location will have its own operating limits. Expect most wireless CCTV camera wireless kits to send data to a range of about 1.5km Line-of-sight. A clear line of sight transmission is absolutely essential for 5.8Ghz microwave wireless transmission.

Obviously a wireless connection allows you greater freedom to place your CCTV camera almost anywhere. While wireless CCTV cameras transmit their video images to a digital video recorder or monitor, many of these types of cameras must be plugged into an electrical outlet. There is however some CCTV cameras that are battery operated.

IP cameras have a great advantage in wireless CCTV systems. Multiple IP cameras can be transmitted very long distances using a single professional IP wireless link, you could have ten IP cameras transmitted 5km back to a recorder from several different locations. Analogue security cameras need one transmitter/receiver per camera, which can be very expensive.

There are two types of DVR's (Digital Video Recorders). They are either stand alone devices or hard drives that are connected to a computer system. DVR's work similar to VCR's except the images they capture from the CCTV camera is digital. The amount of digital images you can capture on a DVR is determined by a few factors including the frames per second recorded, the amount of cameras hooked up to the DVR device, the resolution that the DVR saves the images at and the video compression used (e.g. MPEG4). For a common set up, where you have 4 cameras shooting at 30 fps and you use an image resolution of 320 X 240, each camera only records when motion is on, and you use MPEG4 compression, you should be able fill up a 20 to 25 GB hard drive in about 80 hours.

Newer recoders use the H.264+ compression, which can double the storage capabilities of H.264 recorders. New HIKVision recorders for 2017 can reduce the amount of storage required by up to 80% using the latest H.265+ compression techniques. Recordings times of six months and more can easily be achieved, even when using Full HD cameras.

An NVR is used for IP network cameras.

A Hybrid recorder is use for a combination of analogue and IP CCTV cameras.

A Guide to Data Protection for Data Controllers in Ireland

Thanks to the excellent guys at: http://www.tech-faq.com/ for the information